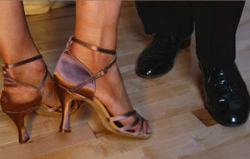 Dancing with the Stars - Week 2 Breakdown

Quickstep What an incredibly difficult venture for the men. I have to admit that between the Cha Cha last week and the Quickstep this week, the men really have had the short end of the stick! The quickstep is quite the zippy and peppy dance, incorporating the flight elements of the Waltz and Fox Trot with the Jazz & Razmataz of the Charleston.

Rumba On the other side of the coin, the ladies seem to have the easiest dances! The Rumba is a sultry and sensual dance -- the dance of love. Watch for a strong leg and hip action as well as an atmosphere of passion and heat!

Lisa & Louis Very impressive showing for Lisa -- very sexy and sensual, everything that a Rumba should be! A little shaky in her balance at points, I still felt that she was holding back in some of her movements. Great chemistry though -- I really felt this one. Predictably though, as the first dancer the judges scored her lower than she deserved.

Drew & Cheryl Pretty impressive again this week for Drew. A very difficult dance for a beginner and he pulled it off well. A few mis-steps as can be expected in a dance of this difficulty, but this young man is really tearing up the floor. Drew Lachey is quickly becoming a heavy favourite to win this contest!

Tia & Maksim A series of Cucarachas opens this routine -- movements that perfectly captures the essense of the Rumba. Tia displayed a great use of legs in her latin movement, as well as an excellent use of arms to produce strong lines... overall a good effort. While quite technically sound though, the chemistry that we are looking for in Rumba wasn't quite there -- she even looked quite angry at points. To add insult to injury, the judges weren't too happy with her Heel Leads -- a cardinal sin in the Rumba.

George & Edyta A great opening -- athletics not withstanding, this dance should really give George a chance to show off his elegance. He really played to his strengths as an actor and did a great job in spite of his physical limitations. His solo piece was exceptional, reeking of elegance as predicted. Not enough actual "Quickstep" for Len's taste, but very very entertaining!!

Tatum & Nick This dance is definitely not Tatum's best performance. Several timing errors, mis-cues and mis-steps, she looked very uncomfortable -- very stiff and cold. Lots of smoke and mirriors as she dances from line to line. In true Hollywood Drama Queen fashion, Tatum was visibly upset after the dance, and rightfully so -- being "nervous" is no excuse.

Jerry & Anna Very good with the technical elements of the Quickstep but it was lacking the energy that is characteristic of this dance. A few mis-steps, as can be expected with this dance, but a very strong and exciting ending.

Stacy & Tony What an impressive dancer this girl is. It's to be expected with her many years of training of course. An impressive showing once again this week for Stacy, as she and Tony opt to dance the more classical movements rather than hiding behind all the smoke & mirrors. Seems the judges are in agreement, as Stacy's rumba earned her 2 10's and an overal 1st place!

Master P & Ashley I just have to say that this guy's running shoes are seriously hampering his movement. Granted he's actually moving this week -- clearly he's trying harder, though as a musician his timing is seriously lacking. I really feel for Ashley -- I have had my share of difficult, bull-headed students over the years and I certainly don't envy Ashley with this one.

Giselle & Jonathan Strong, sharp dancer, but this one lacked the fluidity that is necessary for the leg and hip movement of Rumba. This is a woman that appears not to be too comfortable with her sensuality. The potential is there though.

I love how the crowd really gets into it, cheering for the judges' positive feedback and booing for all the criticism. Did you agree or disagree with the judges? What did you think of what I thought? Comment on this blog and let me know! A la prochaine!